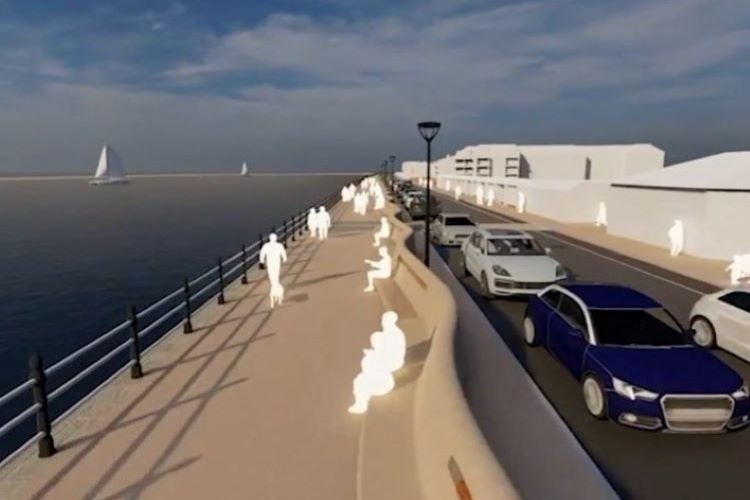 A brand new flood defence scheme for West Kirby was given the go-ahead by Wirral Council’s planning committee last week.

The scheme, which has been nearly six years in planning, will involve the construction of a 1.1km long curved wall along South Parade, between the junctions with Sandy Lane and Riversdale Road.

At 1.2m high, the wall will act as a barrier separating South Parade and properties situated on it from potentially damaging flood waters, which Council and Environment Agency officers confirmed were becoming an increasingly likely occurrence as a result of climate change and other natural phenomena.

With planning consent now in place – the committee voted 5 to 2 in favour - work is anticipated to start in February 2022 and last until October 2022.

This timeframe is in line with the recommendations of a Habitat Regulations Assessment carried out as part of the planning process and will minimize disruption to migrating birds and other wildlife that are present at times at West Kirby.

During the work, temporary road and footpath closures would be put in place for short sections of South Parade at a time, with access for residents only. The Council and the Environment Agency’s framework Contractors, who will be constructing the Works, will be engaging with local residents ahead of - and throughout - the scheme and assisting them to keep disruption to a minimum..

As well as the barrier itself - the design of which will resemble a wave with a continuous curve containing seating, memorial or celebratory plaques, access points and crossing spaces – the scheme also includes an upgraded public realm, including new paving and highway on South Parade, refurbishment of the Old Baths and the introduction of a dedicated cycle lane.

Why is it needed?

Since December 2013 there have been more than 20 flood events at West Kirby, with four considered significant. With sea levels rising, the issue is only going to get worse.

A number of different options were considered for providing the necessary protection, but the concept of a barrier adjacent to the highway was identified as the preferred option by the council and which met national environmental, technical and financial criteria for grant aid funding from the Environment Agency.

The scheme will protect 70 properties at risk of flooding now from extreme tidal events and give more than 500 properties improved protection over the next century as sea levels rise.

Where is the funding coming from?

The cost is being covered by a £2.2m flood defence grant, a £1m contribution from other Central Governments funding  streams and the balance from Wirral Council’s capital programme for infrastructure projects.

An initial consultation took place in 2015 and again in 2019, following confirmation of Environment Agency funding.

Changes made to the initial proposal as a result of public opinion included:-