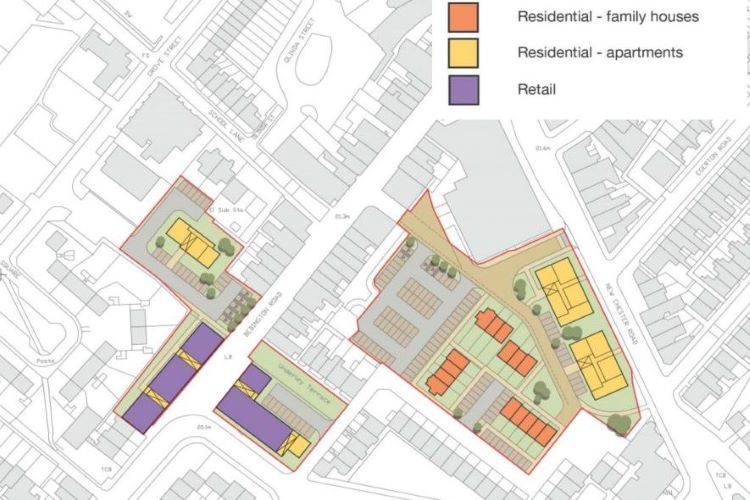 The regeneration of New Ferry has taken a significant step forward with the granting of outline planning consent for a mixture of new residential and retail units to be built on three separate areas of land.

One of those areas earmarked for development is the site of the March 2017 gas explosion on Boundary Road, while another development will be opposite the explosion site where many existing retail and residential buildings were damaged beyond repair in that blast.

The third site incorporates a block of largely derelict and disused retail units along the main New Chester Road, as well as part of a council-owned car park on Woodhead Street that backs onto the explosion site.

In total, across the three sites the proposal is for the building of up to 79 new residential units – a mixture of two and three-bedroom houses and one and two-bedroom apartments. The planning consent also incorporates more than 1,000 square metres of retail floorspace across the sites.

Details of each proposed development is as follows:-

Wirral Council leader, Cllr Pat Hackett, said: “New Ferry is one of Wirral Council’s major priorities - even more so since that devastating night in March 2017. It has been, however, a very complex process to get to the position we are now in, which is a significant milestone for the redevelopment plans.

“Outline planning permission will allow us to present three separate areas of land – including those sites most badly affected by the explosion – to developers and will allow the council to move forward with the acquisition of those properties still in private-ownership, by compulsory purchase if necessary.

“We have ambitious plans for the town and I’m pleased that the patience of residents, business owners and visitors to New Ferry will soon be rewarded.”

Groundwork on the sites affected by the explosion has already been taking place to clear and level the land so it can be used by the local community until the built redevelopments begin.