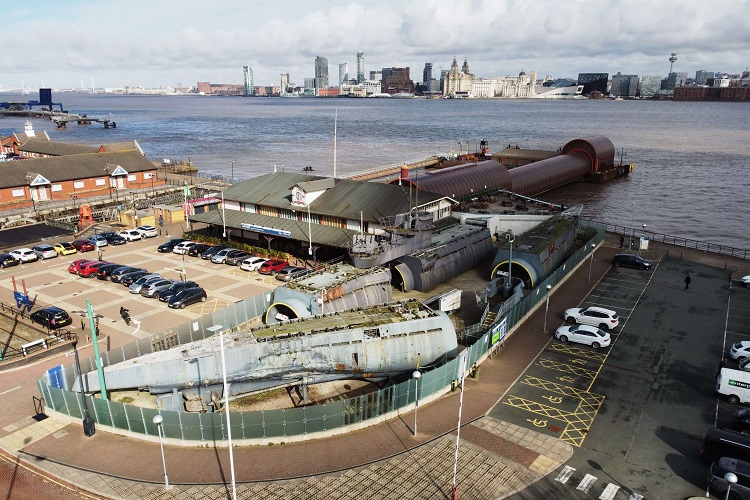 A multimillion-pound scheme centred around historic WW2 German submarine U-534 is under way in Woodside, Birkenhead, and and this is your chance to get involved and have a say in its future.

The submarine – one of only four surviving U-boats out of over 1100 built – was sunk by RAF bombers in 1945 and raised from the seabed in 1993. It was later moved in sections to its current Birkenhead site, forming the centrepiece of the ‘U-Boat Story’ museum until closure in 2020.  As the submarine’s new custodians, Big Heritage want to build a new museum befitting the boat’s historic importance. They have appointed Liverpool architects MGMA to bring these ambitions to life.

Big Heritage are the operators of Western Approaches HQ, the hardened bunker in Liverpool where the Allied fight against the U-boats was masterminded, having revamped it into an acclaimed tourist attraction. Acquiring U-534 now gives them the opportunity to tell the story of the Battle Of The Atlantic from both sides.

The new attraction will also be a key part of the wider regeneration of the Woodside area, alongside the Mersey Ferries terminal, heritage tramway and other amenities. Grants from the government’s Levelling Up Fund and the Liverpool City Region Combined Authority Levelling Up Fund are supporting several projects, including the new U-Boat attraction, designed to transform the Woodside waterfront into a leading visitor destination and make the most of its position on the River Mersey. These attractions can combine to form a diverse tourism and educational hub with unrivalled transport links.

Cllr Tony Jones, Chair of Wirral Council’s Economy, Regeneration and Development committee, believes the benefits will be significant for the local area.

He said: “Upgrades to the U-Boat attraction at Woodside have the potential to generate catalytic change at Woodside as part of the wider regeneration of Birkenhead. This presents a fantastic opportunity for the community to help shape the project and it’s really important that people share their views and memories to ensure that the new museum reflects local stories and experiences.” Big Heritage are a local company, and our MD Dean Paton is a Birkenhead native, so we’re taking community engagement seriously. We’ve partnered with social enterprise Placed to gather ideas, thoughts and feedback from the general public as we launch our ‘Social Pinpoint’ site. This isn’t some corporate box-ticking exercise; it’s really important to us that everyone gets a chance to chip in. As Placed say:

“Big Heritage are about to start developing the project in more detail. But they want to ensure they hear the ideas and views of their community, right from the start and throughout the design process.” The U-534 project is of both local and international importance, so they are welcoming feedback not just from the local community but from anyone with an interest, wherever they may be. Local residents, enthusiasts, historians, parents, tourists ... they want to know what will make it a compelling experience for you while we work to preserve this incredible relic for generations to come.

They would also love to hear from anyone with memories of the Woodside area over the years, and of course people with connections to the Battle Of The Atlantic. Did your dad serve on the WW2 merchant convoys, or build warships at Cammell Laird? Did you wave off steam trains at Woodside Station, or serve tea at the ferry terminal in the swinging sixties? No matter how small the connection, they are keen to hear your stories.

Contributing to the Placed project is quick and easy with no registration or personal details needed. Users can leave comments or suggestions on an ‘Idea Wall’, add pins to a map of the area, or take a short survey, as well as voting on other users’ posts.

More info is available on the Placed website at: www.placed-engagement.org.uk/u-boat-story