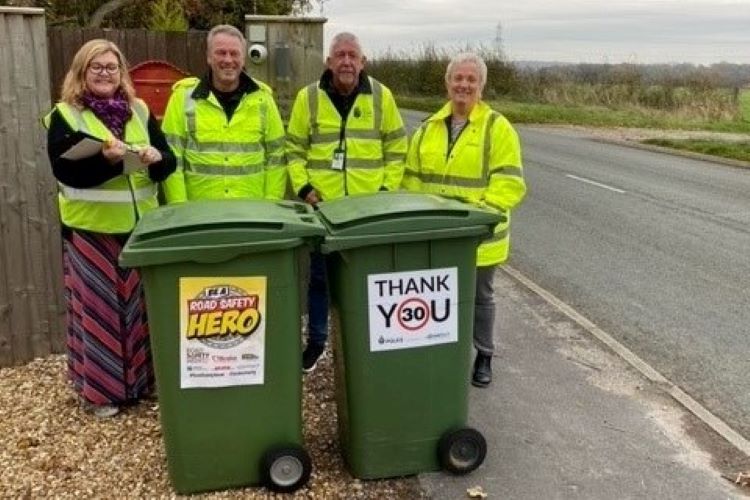 Communities from all over Merseyside are being celebrated for supporting an initiative to improve road safety where they live.

In support of the UK’s biggest road safety week this week, Merseyside Road Safety Partnership, along with road safety charity ‘Brake’, are shining the spotlight on road safety heroes.

Safer Roads Watch is an initiative from the Merseyside Road Safety Partnership that enables people who are concerned about speeding, anti-social road use and pavement obstruction to work with police and local authorities to address these issues and to raise awareness among drivers of the how they affect communities.

People can become a police volunteer and be trained to operate speed watch operations with police, in which speeding drivers are sent a pack containing a letter advising them of their speeding and advice about how they can contribute to road safety in Merseyside.

Volunteer residents’ groups and school groups are supplied with materials to help them promote the scheme including wheelie bin stickers and ‘Pavement Parking’ cards which can be left on cars which obstruct pavements.

“This is a great opportunity for communities to come together with police, local authorities and potentially local businesses to change the way in which their roads are used or misused. Speeding and anti-social driving are a significant problem for police and councils to deal with and cause concern for parents and the most vulnerable in society. Excessive and inappropriate speed are also factors in many collisions that result in serious injury and road death”.

There are several community groups established in Merseyside, including Wirral, where there are over 30 residents either ‘signed up’ or in the process of becoming volunteers. Some of these groups are operating in various locations across Wirral this week.

“Speeding and anti-social driving are some of the most common complaints that our officers receive every week. Through Safer Roads Watch, we are enabling communities to help us to help them, a real partnership approach to a widespread problem. Merseyside Police will not tolerate those drivers who present a danger to other more vulnerable road users such as children and the elderly.  We will enforce the speed limits on our residential roads and also welcome Safer Roads Watch which has the potential to influence drivers and change their behaviour without the associated penalties.”

The Safer Roads Watch scheme is looking to recruit more road safety hero volunteers. Email MRSP@merseyside.police.uk to find out how to sign-up.