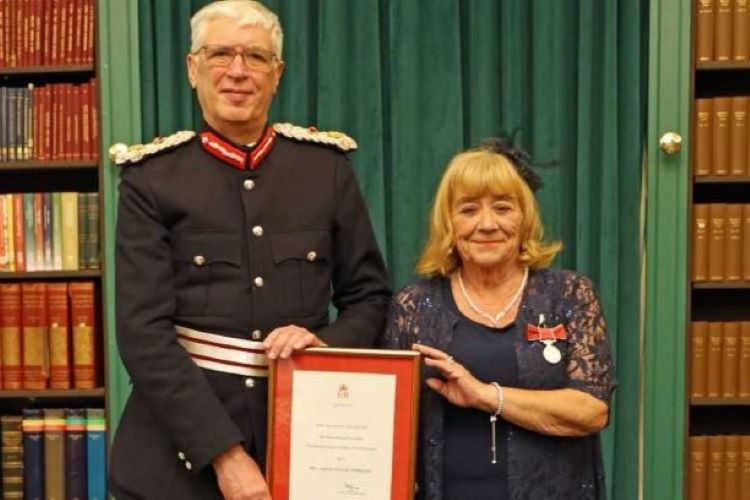 A long serving tenant and Board Director of Magenta Living and local volunteer, Muriel Wilkinson was presented with her British Empire Medal by Her Majesty’s Lord-Lieutenant, Mr Mark Blundell, on Friday 18 October at The Athenaeum in Liverpool.

Muriel was awarded a British Empire Medal for her services to housing having been officially involved with Wirral based Magenta Living since 2005. Muriel became a Company Member in 2008 and was officially appointed to the Magenta Living Board in April 2013.

Muriel has many years’ experience of voluntary work in various communities and has also run her own business. She is still an active member in her neighbourhood providing support and advice when needed to fellow tenants and residents. Muriel still arranges luncheon clubs and charity events where she lives, providing an opportunity for the community to come together.

Muriel is Chair of the Wirral Residents Umbrella Association, which was set up in September 2010. The Umbrella Association as it’s known, is an independent group of Magenta Living tenants and residents representing the neighbourhoods where they live. By chairing this group, it provides an opportunity for Muriel to have real knowledge and insight into the neighbourhood activities and provides a voice for those involved direct to Magenta Living’s Board.

“I am so honoured and proud to have been awarded a British Empire Medal and to have it presented by Her Majesty’s Lord-Lieutenant. It has been an absolutely wonderful day and I’m so glad I got to share it with my family and chair of Magenta Living’s Board, David Clark. Volunteering and helping people is what I love doing and I’ll keep going until I have to retire!”

Muriel has recently been instrumental in helping develop and set up the Magenta Communities Committee. Magenta Communities oversees the delivery of activities which create social value in local neighbourhoods, something about which Muriel is extremely passionate.

Brian Simpson, Magenta Living Chief Executive said: “I’m so pleased that Muriel has been recognised for her services to housing in the Queen’s Birthday Honour’s list. This is such a testament to Muriel’s service not only to Magenta Living but to her volunteering and community work too. Muriel is a fundamental part of our Board structure and continues to support our work within the neighbourhoods that we serve in.”