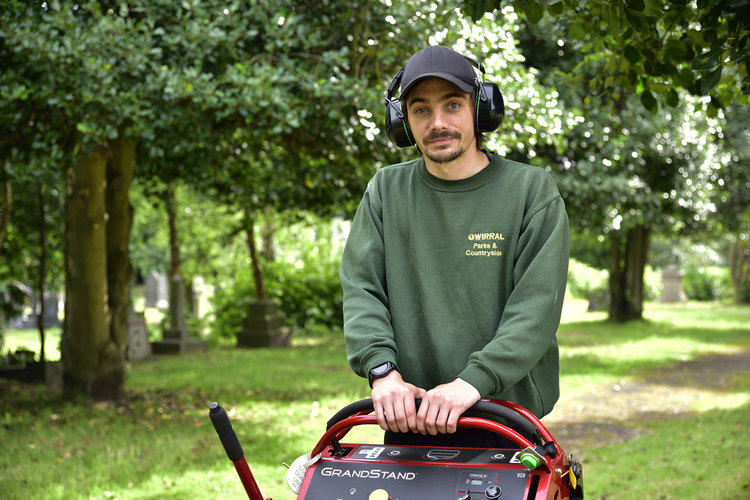 In the first of a series of blogs, Wirral Council Ground Maintenance Supervisor Luke talks about his working life at our heritage gem Flaybrick Memorial Gardens.

I’ve worked at Flaybrick for nearly three years, and in that time I’ve become more and more passionate about its past, present and future. Flaybrick is the oldest and biggest cemetery in the borough, and although few people are now buried there, people still visit their family plots and ashes can be buried in them.

Flaybrick is currently on the national Heritage at Risk Register. We’re working on a few ambitious projects to bring the site back to what it was in 1864.

By working with volunteers, staff, Historic England, schools and military groups, we want to give the community a sense of ownership over Flaybrick. The place isn’t just stones sticking out of the ground – these are our grandparents, great-grandparents, aunties and uncles, and a part of our history.

There are lots of things people don’t know about the cemetery. It’s on an old quarry site with three different levels, and it’s estimated that there are between 150-200 thousand people buried there. Burial sites are six-deep, alongside vaults and mass graves. While we need to keep the main areas of the site looking good as they see the most footfall, we do try to look after all graves equally, irrespective of where people are buried (in the mid-1800s, richer people were buried at the centre of the cemetery on the main drives, where the graves of Birkenhead’s John Laird and Edward Kemp are held).

Whenever the tv programme Who Do You Think You Are is on, everyone gets into their family history! I’d say that this is the most impact we have on residents. We probably help people to find family plots about 5-10 times per week. To get the plot number, we just need to know the year the person died and ideally the month they were buried, and then we go through the records at Landican. When you can show someone a patch of grass which contains six of their relatives, it has quite a profound impact on them. And while we have more elaborate graves of well-known local people at Flaybrick, it’s showing someone a patch of grass containing their family member that stirs up the most emotion in them.

Working outdoors is great – even in colder weather. And cutting the grass can be therapeutic. But linking people to their past is what we do, and we can’t put a price on that. I love the fact that someone has been doing my job wearing the council badge for the last 150-odd years. Four of my predecessors are actually buried in Flaybrick, which is quite humbling!

On-site each of our team has their own area of expertise. I came through the modern apprenticeship scheme as a greenkeeper, and I look after 30 acres of grassland. Flaybrick has acid grassland, plus a lot of rare grass, wildlife, and rare wildflowers. My colleague John Collins is a highly qualified tree surgeon – which is important as Flaybrick has more protected trees within a conservation area than any other part of the country – and 12 ‘Champion trees’: recorded as critically important to the British Isles. Then there’s Trevor Clarke who looks after graves, and who we all say has the grave map embedded in his memory!

In the last couple of weeks, we’ve started a new project with Cllr Christine Spriggs and the Friends groups to open up 4-7 mass graves which have been fenced off since the 1970s. We think there are 10-30k people fenced off in this section – many of whom helped to build Wirral and its docks. This project is really important to me, and I feel privileged to be a part of it.

We work closely with local volunteers at Flaybrick, and we welcome new ideas and support. If you’d like to get involved with any of our restoration projects, please do get in touch!